The uniqueness of Autonox Robotics DELTA robots is that the robots can be controlled by different controllers, servo drives of different manufacturers (robot mechanics are supplied).

Therefore, MAJA's main customers are manufacturers of industrial machines / machine tools, for whom it is important to unify control platforms. These robots have drive systems that can be easily compatible with other equipment. Autonox Robotics manufactures the robots themselves from design to series production. This ensures maximum product quality, continuous improvement and innovation.

TECHVITAS together with Autonox Robotics will offer you the most acceptable solution! 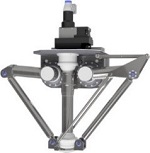 Delta robots are designed to run at high speeds and perform repetitive tasks quickly and accurately. These robots are suitable to replace manual processes that require lifting, sorting and positioning of products. Delta robots are used not only to improve the consistency and quality of processes where repetitive movements ultimately cause employee fatigue, but also to eliminate the possibility of various injuries associated with repetitive motions.

Delta robots are a great choice, when it comes to pick and place of light loads and / or small items. Due to its subtle functionality, this robot can assure accurate and consistent movements. They are often used in industries such as food industry, pharmaceuticals, and electronics.

When applications for light payloads and rapid cycle times are considered, whether it is assembly, pick & place, or other application, it is usually not a challenge for a delta type robot.

Delta robots were originally designed for small-scale applications, such as packaging. That is why they are popular in food industry. Here they are used to sort and pack everything from small chocolates to frozen fish sticks. Manufacturers of cosmetics and pharmaceuticals are also known for using delta-type robots in their production lines.

In addition to packaging, manufacturers find that delta robots are ideal for a variety of assembly tasks, such as gluing, packaging, screwing and soldering. Moreover, delta robots are used to make batteries, electrical switches, electronics, medical devices, pens, semiconductor devices, solar panels, and other products.

TECHVITAS together with Autonox Robotics will offer you a most suitable solution!

What is special about Autonox Robotics delta robots is that they do not depend on a single, specific controller. This means that the robots can be controlled with a controller chosen by you and are delivered with customized gear unit connection flanges for the servo motors of your choice.

Advantages of the hygienic design: